Aerial photographer 360photosurvey.com captured what is believed to be the last aerial photos of Barton Lift bridge over the Manchester Ship Canal before its catastrophic structural collapse on 16th May 2016.  Thankfully no one was injured.

This extract from the photoshoot shows the bridge deck in its raised position enabling ships to pass under. 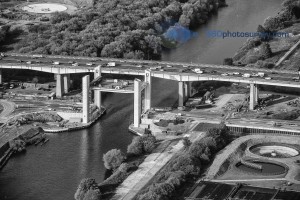